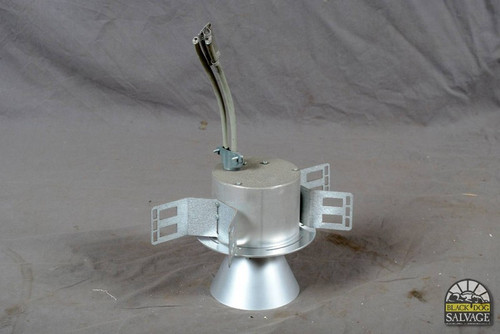 This vintage recessed ceiling light fixture was salvaged from a decommissioned ferry boat that traveled between Delaware and New Jersey. The fixture is the "Pulsar", designed by Alfred Homann for the high-end lighting manufacturer Louis Poulsen.
This light consists of 3 pieces; the shade, the aluminum ceiling trim and an aluminum electronics housing with galvanized hanger bars.
The cone-shaped shade is made of acrylic with a matte, metallic finish. The housing includes a ballast and a snap-in CFL lamp-holder with an output of 70w, 600v.

Condition: Very good. Some fixtures show more surface scuffing and dings than others. The lights worked when installed but have not been tested since salvaged.

History: This light was salvaged from the MV Twin Capes, a ferry that traveled between Lewes, Delaware and Cape May, New Jersey on the Delaware Bay. The MV Twin Capes was in operation from 1975 to 2013 when it was retired from service. Between 1994 and 1996, this ferry underwent an extensive, $27 million, renovation project, resulting in the classification of the Twin Capes as a miniature cruise ship. In 2010, due to a decrease in ridership, the ferry was announced for sale by the Delaware River and Bay Authority (DRBA) and later made its final voyage in summer of 2013. The MV Twin Capes was towed out of Cape May in 2017 to be stripped and salvaged. She was scuttled on June 15, 2018 in the Atlantic Ocean about 33 nautical miles (61 km) from Cape May, New Jersey, to form an artificial reef. Her wreck now joins several other retired ships that form the acclaimed Del-Jersey-Land Inshore Reef, an artificial reef system created to promote a healthier marine habitat.
The MV Twin Capes and items salvaged from it are featured in Season 9, Episodes 4 and 5, of the DIY Network show, "Salvage Dawgs".