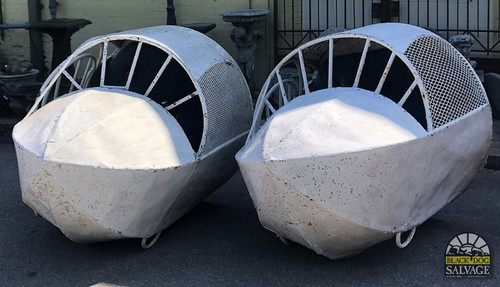 Sold individually.
This car was salvaged from the Lakeside Amusement Park in Salem, Virginia. The park closed in 1986. The car is from the "Roll-O-Plane" ride, also known as the Bullet or "The Peanut".

The ride consists of a rotating arm mounted to a pivoting hinge on a support column. The arm has two enclosed cars (one at the top and bottom) that hold four riders each, seated in pairs facing opposite directions.
When in motion, the arm swings until it makes a complete loop, though the riders never become inverted. The arm pivots while the ride is in motion and the cars are free to "roll" while the ride is in motion, always keeping the riders right-side-up.

History: The cars were part of a ride at the Lakeside Amusement Park in Salem, Virginia, which opened in 1920 and closed in 1986.

Condition: Structurally solid, paint loss, scratches, scuffs, and dents present as expected with age and use.