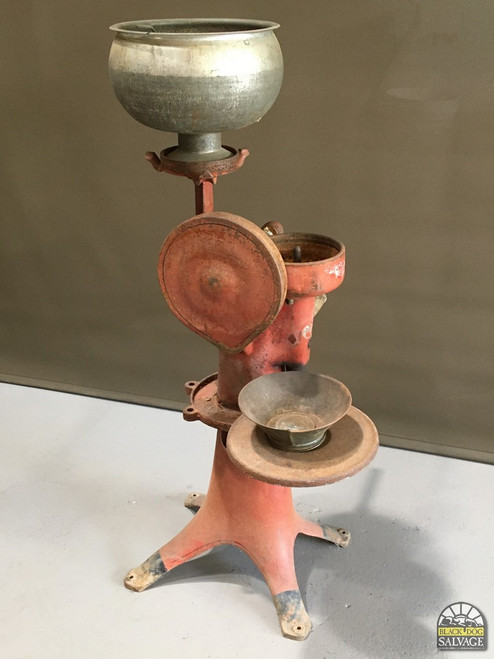 This Economy cream separator was manufactured between 1902-1947 by Sears, Roebuck and Co. A partial image of the manufacturer's logo can be viewed through the flaked layers of paint upon the side of the cream bowl.

The hand crank has the original wood handle and guides the user with "60 Turns a Minute". The fly wheel under the hand wheel shows the words "This side out",

Condition: Good condition for age and use. The fresh milk tank (top bowl) shows some patina and dings. The iron body of the machine shows fading and flakes. Surface rust is present in areas.

History of the Economy Cream Separator (from the Sears Archives site):
The Economy Cream Separator represented the first major brand-name product promotion for Sears, Roebuck and Co. Sears eventually put the Economy brand name on iceboxes, fountain pens, a sewing machine cabinet, gasoline engines, portable saw rigs, and a variety of farm equipment. It was the cream separator, however, that became the product most identified with Economy. The cream separator, invented in 1890 by C.G.P. Delavai, was an ingenious mechanical device for separating the cream from milk. In the late 19th century, milk cows produced on average 5,500 pounds of milk containing 200 pounds of cream each year. Before the invention of the cream separator, there were mostly unsatisfactory and unhealthy—not to mention expensive—methods for separating the cream from the whole milk.

Cream separators first appeared in the Sears catalog in 1896. Legend has it that while on a hunting trip in North Dakota with other company officials, founder Richard W. Sears stopped at a dairy farm and noticed a man using one of the new centrifugal cream separators. Sears spoke with the farmer and found out that the machine worked very well, but that it cost him more than $100. Richard Sears knew he could sell one for less.

He rushed back to Chicago to look for a manufacturer. In 1902, Sears introduced the line of "Economy Cream Separators," with the least-expensive model priced at $24.95. To promote the new Economy Cream Separators, Richard Sears proclaimed, "We will give $1,000.00 in Gold to the separator manufacturer who can produce a machine that will outskim the Improved Economy." No one accepted the challenge.