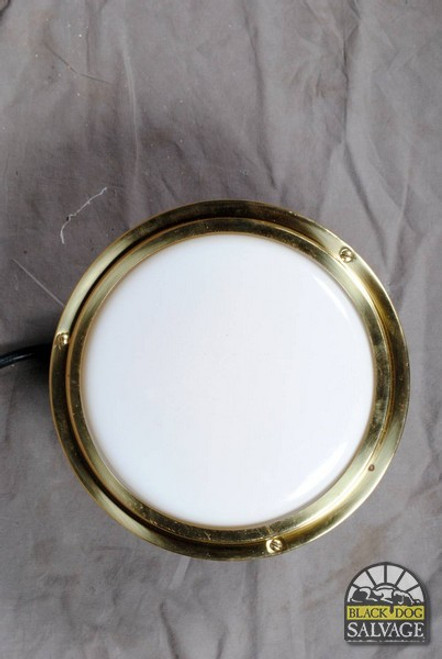 Flush-mount captain's ceiling light with white shade manufactured by the high-end lighting company, Louis Poulsen. This light has an opaque, white, acrylic shade held in place by a brass ring. This fixture holds 2 13 watt CFL lamps with 4-pin snap-in sockets. Condition varies per piece, some have tarnished brass, some shades are slightly off color. This light was salvaged from the MV Twin Capes, a ferry that traveled between Lewes, Delaware and Cape May, New Jersey on the Delaware Bay. The MV Twin Capes was in operation from 1975 to 2013 when it was retired from service. Between 1994 and 1996, this ferry underwent an extensive, $27 million, renovation project, resulting in the classification of the Twin Capes as a miniature cruise ship. In 2010, due to a decrease in ridership, the ferry was announced for sale by the Delaware River and Bay Authority (DRBA) and later made its final voyage in summer of 2013. The MV Twin Capes was towed out of Cape May in 2017 to be stripped and salvaged. In 2018, this ferry will be sunk to become part of an artificial offshore reef. The MV Twin Capes and items salvaged from it are featured in Season 9, Episodes 4 and 5, of the DiY Network show, "Salvage Dawgs". Weight: 5 lbs. Item Measurements: 9.5(L) x 9.5(W) x 5.3(H) As seen on Season 9, Episodes 4 and 5